The series of US commemorative half dollars struck between 1892 and 1954 has never really sparked the imagination of collectors despite some interesting designs and low mintages. This may be due to many of the events commemorated being of limited importance. However the coins dated 1936 and 1937 commemorating the great Civil War battles of Antietam and Gettysburg were inspired by events of national importance.

In this post I will tell a little about the Antietam half dollar.

The Battle of Antietam was fought on 17 September 1862 near Sharpsburg in Maryland between the Union army led by General George McClellan and the Confederates led by Robert E. Lee. The latter had invaded Maryland and was threatening to push further into Union territory. It is the bloodiest single day battle in US history with over 20,000 casualties, including 5000 killed. The key phase of the battle was fought over a stone bridge crossing Antietam Creek, which is now called  Burnside bridge after the Union general. The armies fought to a standstill. Lee managed to withdraw his battered army back into Virginia. Yet the battle was regarded as a missed opportunity for the Union. Despite a nearly 2 to 1 advantage they failed to destroy Lee’s army and then failed to pursue it. President Lincoln later dismissed McClellan for this. 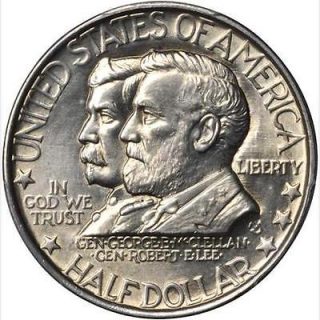 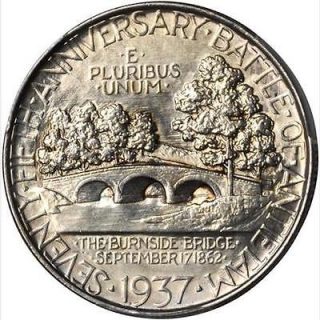 The coin was struck to commemorate the 75th anniversary of the battle. Dated 1937, it features busts of the 2 opposing generals on the obverse and the bridge over Antietam Creek on the reverse. 50,000 were initially minted. It was a poor seller at $1.65 so 32,000 were returned and melted down. With a mintage of only 18,000 which is low by US standards they are relatively easy to obtain from the US with MS63 examples selling around US$500-600.